Down By the Old Mill Stream 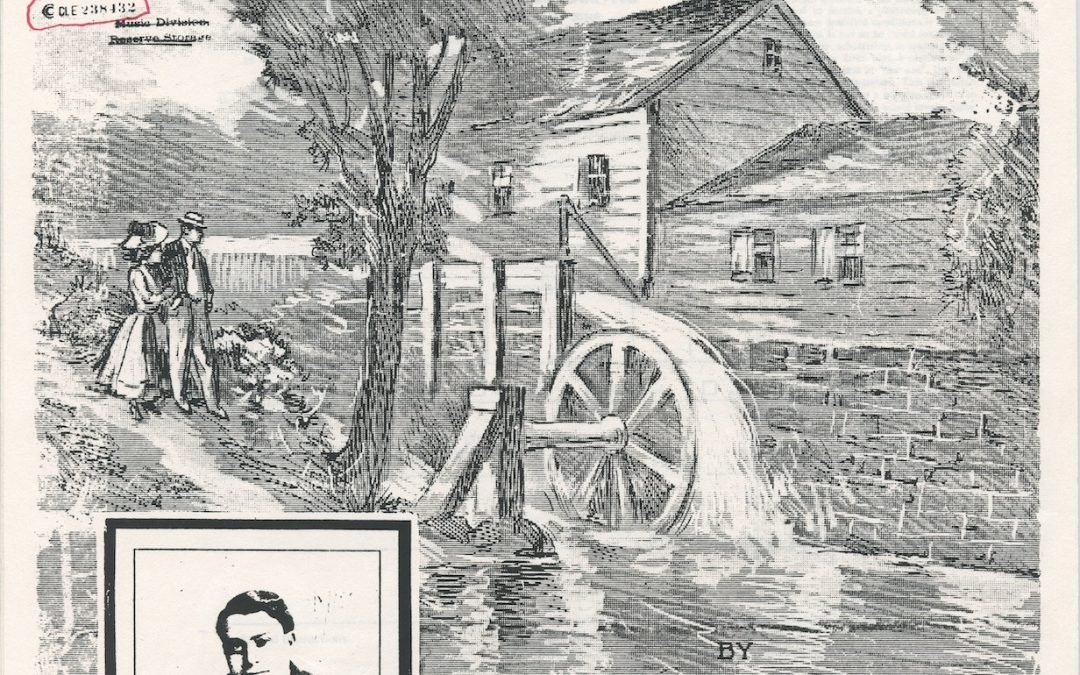 Did you know that one of the most popular songs of the early 20th century was inspired and written right here in Sullivan? “Down by the Old Mill Stream” was originally penned by local barber Frank L. Carleton, who was persuaded to sell the work for $60 to a summer visitor by the name of Tell Taylor, who heard the song while having a shave. Taylor, a music publisher from Ohio, knew a hit when he heard it, and published the song under his own name in 1910, without giving Carleton any credit. It became a staple of barbershop quartets, vaudeville, and eventually mainstream music, and went on to bring in over $80,000 in profits.

Back in Sullivan, Frank Carleton, who’d been writing his own songs and poems since the 1870s, continued working in his barbershop. Locally, everyone knew that the song was his, even as it was covered by the Marx Brothers, Bing Crosby, Benny Goodman, Nat King Cole – even John Denver and the Muppets! Over the years, the issue of authorship was brought up by Carleton’s family, but as no written contract was made when Tell Taylor handed Carleton the $60, there was no way to prove it. In those old days, things were done on a handshake and a smile in the barbershop, but Carleton would have had no idea he was passing up the chance to become a wealthy man. He published other songs in the same vein, such as “My Rosalie of Tennessee” and “When I Tied the Bow of Blue on Bessie’s Hair”. Sheet music cover art for another of Carleton’s songs, published in 1922.

There is some debate over which stream Carleton referred to in the song. In 1939, after Carleton’s death, Chief Stanwood of Big Chief Camps at Tunk Lake wrote to the paper and declared that Frank had told him it was Morancy Stream. Carleton’s granddaughters later remembered that it was the small stream behind Frank’s house on present-day US Route 1 and Route 200, by the Mill Pond. That was the Mill Brook, though a mill never existed on it, nor could one be supported by the meager water flow. Another issue is that accounts vary as to when Carleton wrote the song. Chief Stanwood asserted that he had written it prior to 1882, as he had heard it himself then. If that is the case, Carleton didn’t live by the Mill Brook at that time. Others maintain that he wrote the song in 1908, which would align with the family’s time in that house, as well as making sense of the lyrics which refer to his bride as now having hair of gray after many years of happy marriage.

In the 1980s, much research was done – a collaboration between Carleton’s granddaughters, local reporter Glen Dalton, and the Sullivan-Sorrento Historical Society. Dalton concluded that Morancy Stream must be the inspiration as it was the only stream capable of supporting a mill, and at least two existed there in the 19th century – notably, Reuben Smith’s textile operation established in 1810. He published his findings in both Yankee Magazine and the Ellsworth American in 1984. In 1989, at the Sullivan Bicentennial Celebration, the historical society had a float featuring a mill on a stream to honor the song’s true history. The float won first place!

Whichever stream the song refers to (and why not both?), it was Frank Carleton’s experience here in Sullivan that served as the true inspiration. The song is sentimental, a love song, and starts with the memory of meeting his love, Martha Connors (“With your eyes of blue, dressed in gingham too”), whom he married in 1886, and finishes with a reflection on a life well lived together. They had two daughters, Rae and Bessie. Rae married Dallas Ashe of Gouldsboro and had a daughter, Anne Pauline, before tragically dying of septicemia at the age of 23. Their daughter became a dancer in New York before marrying a Hollywood songwriter and going on to work as an actress there. Frank and Martha’s daughter Bessie married Fred Neale, and they had three children with descendants still living in the area. Frank is buried at York Hill Cemetery in Sullivan.

You can listen to the 1911 recording of the song here. Parade float honoring “Down by the Old Mill Stream” and Frank Carleton at the 1989 Sullivan Bicentennial. The float won first place.