It Took a Village: A Short History of the Clint Ritchie Gymnasium 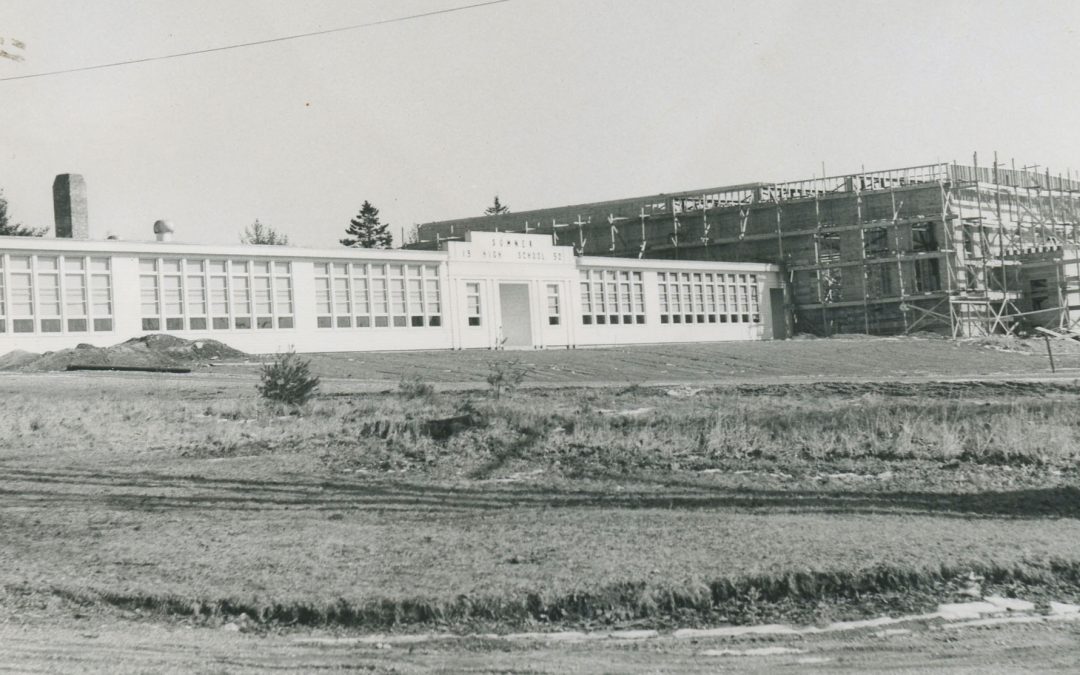 As Sumner Memorial High School prepared to open its doors in the fall of 1952, the towns of Sullivan, Sorrento, Winter Harbor, and Gouldsboro looked to the new area high school as a promise of better education and opportunities, more than any individual town could afford. However, as the school grew nearer and nearer to completion, it appeared more and more deficient in one major area. A cry rose from the community: “We want a gym!”

Financing the school had not been an easy task. A project of the four towns, the area high school was built to replace the region’s two small high schools located in Sullivan and Winter Harbor. Due to insufficient borrowing capacity, the final plans for the area school did not include a gymnasium, and there was no money to build one. Thus, the gym was built in a private initiative via the sale of $20,000 in bonds by the Flanders Bay Athletic Association backed by volunteer labor, cash donations, and many fundraising projects. The estimated cost of the project was $75,000.

Clubs in the area that fundraised and donated generously to the Gym Fund included the Happy Circle Club of Gouldsboro, Prospect Harbor Women’s Club, the W.S.C.S of North Sullivan Methodist Church, the Domaine School of Music (the Monteux School), the Wednesday Club of Ashville, and the Sullivan High School benefit ball game. The newly formed P.T.A. served a Hunter’s Breakfast on the first day of hunting season, raising $281. The ladies of the East Sullivan Christmas Club challenged the Sorrento Stitch and Chatter Club to a benefit game of basketball. The players, age 29 to 65, took to the court in the old Masonic Hall (Knights of Pythias Hall) in front of a reported audience of 350 cheering neighbors.

Community members also donated straight from their pockets, kept on task by Fund Chairman Dwight Havey and others canvassing for donations of money or labor. Several “Work Bees” effectively cut the construction costs significantly. In October, men from all four towns came together to cut logs and haul them to Charles Small’s mill in Ashville to be sawed into lumber for bleachers for the gym. Many worked evenings throughout November, sawing the lumber and assembling bleachers as well as installing insulation in the gym. In December, they mixed and poured cement in the basement under the gymnasium to ready the space for showers. Members of the F.H.A. at Sumner served coffee and donuts under the supervision of their home economics instructor, Mrs. Gwendolyn Cole. At other workdays, the Frenchman’s Bay P.T.A. kept busy supporting workers with dinners and refreshments.

By the school’s second basketball season (1952-53), the Sumner High School team finally had a gymnasium. However, players found themselves wearing mittens or gloves to practice until the heating system was installed, just in time for the first game of the season.

The gymnasium was dedicated to Sumner’s Head Custodian Clint Ritchie in a ceremony on November 27, 1996. The proposal to name the gymnasium after Ritchie stemmed from school and community support for Ritchie, who was to retire at the end of the year after working at Sumner for twenty years and contributing greatly to the school.